New Years Eve is a bumbling festival of expensive cover charges and wasted amateurs. Why not skip the whole thing and go to a party? Check out this tale of one of my exciting New Years Eve celebrations. This story was originally published on 11/19/2010 at my old blog, Bronan The Barbarian.

I decided to get out of town for New Years Eve, so I called up a couple of friends, found a party and hit the road. I arrived in Colorado Springs, gathered up my friend, (hereafter referred to as “Fish Boots”) and headed out for a night on the town. I was in a great mood and walked into the party at the top of my game. We hung around for about an hour, but it quickly became apparent that Fish Boots wasn’t her usual social butterfly self. She pulled me aside and suggested that we abandon ship and hit her sorority sister’s party. I loves me some sorority girls, so I bid our gracious hostess and her roommates farewell.

Fish Boots neglected to inform me that her friend’s house was in Fountain, over 45 minutes away from our current locale. After a lengthy drive and a significant amount of grumbling on my part, we arrived at our destination. I looked up and down the street, searching for the raging party I was promised. ‘Twas nary a soul in sight on the entire block, without even the reassuring glow of a porch light to guide us. Questioning the wisdom of leaving a pretty sweet party, I knocked on the door. 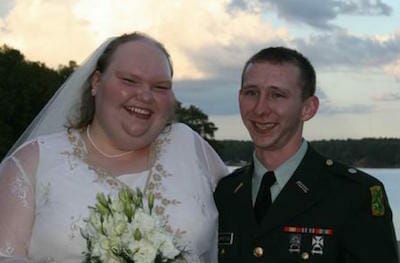 Amazingly enough, the door opened. Fish Boots’ sorority sister Bulky Army Wife beckoned us inside. Unfortunately for me, the “party” consisted of me, Fish Boots, Bulky Army Wife, her husband Army Tweaker and another married couple. Army Tweaker immediately insisted that I get super wasted, pouring me a double grande beer stein full of Tampico and Skol vodka. I gracefully and repeatedly declined as Army Tweaker poured me drink after drink. As the full glasses piled up behind me, I stealthily emptied the booze down the sink.

I made the best of a lame situation and struck up a conversation with Bulky Army Wife. Knowing that I was formerly a recruiter for a popular art web site, Bulky Army Wife mentioned that she paints and asked me to critique her artwork. I agreed and she directed me towards the basement. I waved off Fish Boots’ bizarre squeaks of protest and descended into the bowels of Castle MethMouth.

I surveyed Bulky Army Wife’s mediocre artwork, noting the overdose of nerdery in the form of several oversized Star Wars movie cutouts. As my gaze drifted to the left, I noticed a bed in the corner of the room. As soon as the question “why is there a bed?” surfaced in my mind, it hit me that this bed also had rubber sheets. I looked upward, discovering to my growing horror that thick chains terminating in handcuffs descended from the ceiling. I swiveled my head about the room, observing and a rack above the bed featuring a leather corset, cat o’ nine tails, various riding crops and the crown jewel of any bondage collection – a gigantic black studded dildo almost as long as my forearm.

I’d had enough. I ascended the stairs two at a time, relief flooding over me as I found the door unlocked. Army Tweaker inquired what I thought of his basement as he boisterously declared “We’re swingers!” The events of the night slammed together like fingers in a car door. No wonder this dude was trying so hard to get me drunk! Bulky Army Wife’s insistent drive to get me into the basement! It all makes sense! Thank the various Norse gods that midnight was only minutes away.

As soon as the New Years ball dropped and the group makeout session (from which I was thankfully excused) ended, I grabbed Fish Boots by the scruff on the neck, hauling her out the door and demanding to know why I wasn’t informed of the “state of affairs” at her sorority sister’s house. Fish Boots sheepishly declared that she thought I already knew about her friend’s domination fixation. My mind drifted toward the cute girls I could’ve been scamming on at the first party, yet I mentally declared the night a success – After all, I had escaped the clutches of Bulky Army Wife’s sadomasochistic dungeon, anal virginity intact.

Like this story? Read some more of my adventures!