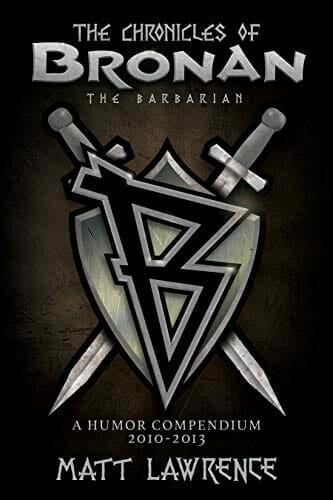 The Chronicles of Bronan The Barbarian

Bronan the Barbarian was a website written and published by Matt Lawrence from 2010 to 2013 and was one of the founding blogs of the “manosphere,” a masculine cultural scene that played a pivotal role in shaping modern society. Lawrence wrote daily articles on everything from bizarre freaks he met at the gym to stories of screwed-up women he dated and everything in between. In contrast to the serious tone many of his peers took, Lawrence wrote to entertain first and foremost, leavening his perspective with humor and wit. While the manosphere may have faded away, its influence on modern dissident culture cannot be denied, with some of its major figures becoming household names in their own right.

The Chronicles of Bronan the Barbarian is a collection of Lawrence’s best articles, available in book form for the first time. Whether you’re reading Lawrence’s secrets to getting laid on Craigslist, learning how his dad taught him about the birds and the bees, or discovering how ladies can give their coochie more Gucci, The Chronicles of Bronan the Barbarian is sure to make you laugh hard enough for a 7 Poop Day.

This edition of the book includes a new foreword by publisher Matt Forney.

“Jared Fogle. Jeffrey Epstein. What did they have in common? Neither owned this book.” — Delicious Tacos, author of The Pussy and Finally, Some Good News

“A throwback to the golden age of comedy blogging. Plenty of laughs and lots of fun.” — Robert Koch, 30 Days to X

Join the world of art! Express yourself through the magic of coloring with 31 soothing, unique, mandala-inspired designs. Color one design per day for an entire month of creativity, or color as many designs as you want for hours of relaxation.

Adult Coloring Book: 31 Soothing Mandala Designs contains 100% original artwork made by graphic designer Matt Lawrence. Each design is different, ranging from simple to complex. Illustrations are printed on one side of the page (instead of front and back) so there is no bleed through when using markers.