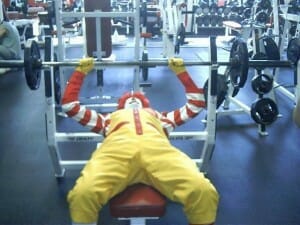 Here’s a picture of your lying ass benching 300 pounds

If you’re a seasoned gym rat, you’ll occasionally encounter the strangest of creatures – The Office Herb Who Doesn’t Lift, Yet Loves To Talk About Lifting. These desk shlubs talk a big game, reliving glory days that never existed. “Hey man, it looks like you lift weights. I’ve been trying to get back into it but I just can’t seem to find the right gym. Check this out though, I’ve been reading all about the new Buttfuck Your Way To Big Muscles program. If you do the whole program for 3 months, Zyzz will appear from beyond the grave and bless your biceps with actual jelly!” Even though it’s obvious that most dudes haven’t seen a weight room since the last Biggest Loser rerun, they always spout the exact same line:

My reply usually goes something like, “Yeah right, Captain Man Titties. You benched 300 and I can curl a 45 with my dick.” Why do herbs, flabby college bros and other assorted chumps always pull the same number out of their asses? I might believe some guy if he said he could rep 185 back in high school, but nope, 300 pounds.

I can’t bench 300 lbs. Not even close, and I’m in the gym almost every day. I’d say the top 5 baddest mofos in my gym can put up that much.

There’s something magical about the number 300. Maybe they’ve seen the movie about Spartans a few too many times and it’s the first lie that pops to mind. Does that number sound realistic to somebody who doesn’t lift? 315 lbs might actually be believable (which is six 45 pound plates plus an olympic bar), but only if you’re pretty big to begin with. Dudes, do yourself a favor. If you’re going to bullshit your bench press stats, do the math. Pick a number that standard weights actually add up to. Even better, get in the gym so you don’t have to lie.