The Excommunication of Pine Sol Guy

I don’t know what the deal is with low-budget workout facilities. Short of Walmart, gyms seem to attract the biggest screwballs on the face of the earth. The lord and master of all Gym Weirdos is Pine Sol Guy, and this is the story of how I got his ass chucked out of the gym forever and always. 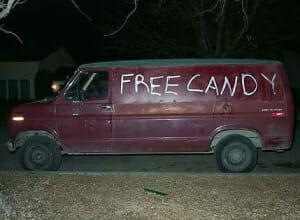 I don’t use the word “creepy” lightly, but Pine Sol Guy is one creepy son of a bitch. The dude lives in his creepy creep van, which is usually parked/broken down in the gym parking lot. This innovative amalgamation of both transportation and housing features metal grating welded over every window to “ward off theft” (prevent escape). There’s also a thick layer of insulation because in  Pine Sol Guy’s van, no one can hear you scream. PSG doesn’t even have the grace to park his van down by the river, since he waits until closing time to invite the desk girls back to his van for drinks. 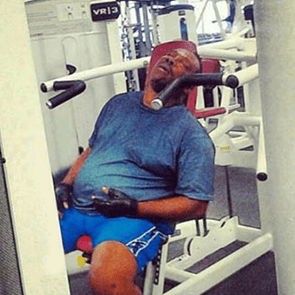 All this is bad enough, but the dude’s greatest offense is his shower behavior. Pine Sol Guy never closes the shower curtain, instead preferring to shave his balls in full view of the entire locker room. Once he’s finished showering, our homeless homie refuses to use a towel. He shakes off like a dog, then helicopters the excess water off of his dick and arms with a bizarre combination of a flopping + twisting motion. The coup de grace is a series of deep knee bends in which he faces anyone in the room and dilates his asshole at them. The WTF parade comes to a close when Pine Sol Guy stinks up the entire locker room with gallons of bottom-shelf cologne that smells like floor cleaner (hence the nickname “Pine Sol Guy”). The bastard reeks up the place so badly, walking into the gym burns your lungs.

After calling him out on his weird ass behavior several times, I finally had enough of Pine Sol Guy’s stench, penis puppetry and general bullshit attitude. I marched up to the general manager and spent ten minutes telling him to throw Pine Sol Guy’s ass out of the gym because even the gayest guy on earth doesn’t want to see this much dick. Turns out about ten other guys (and a hundred girls) had already complained about the stench, disgusting nudity and general weirdness, so they finally booted the creepy bastard out of the gym. Good riddance.

Read next: The Chili Workout